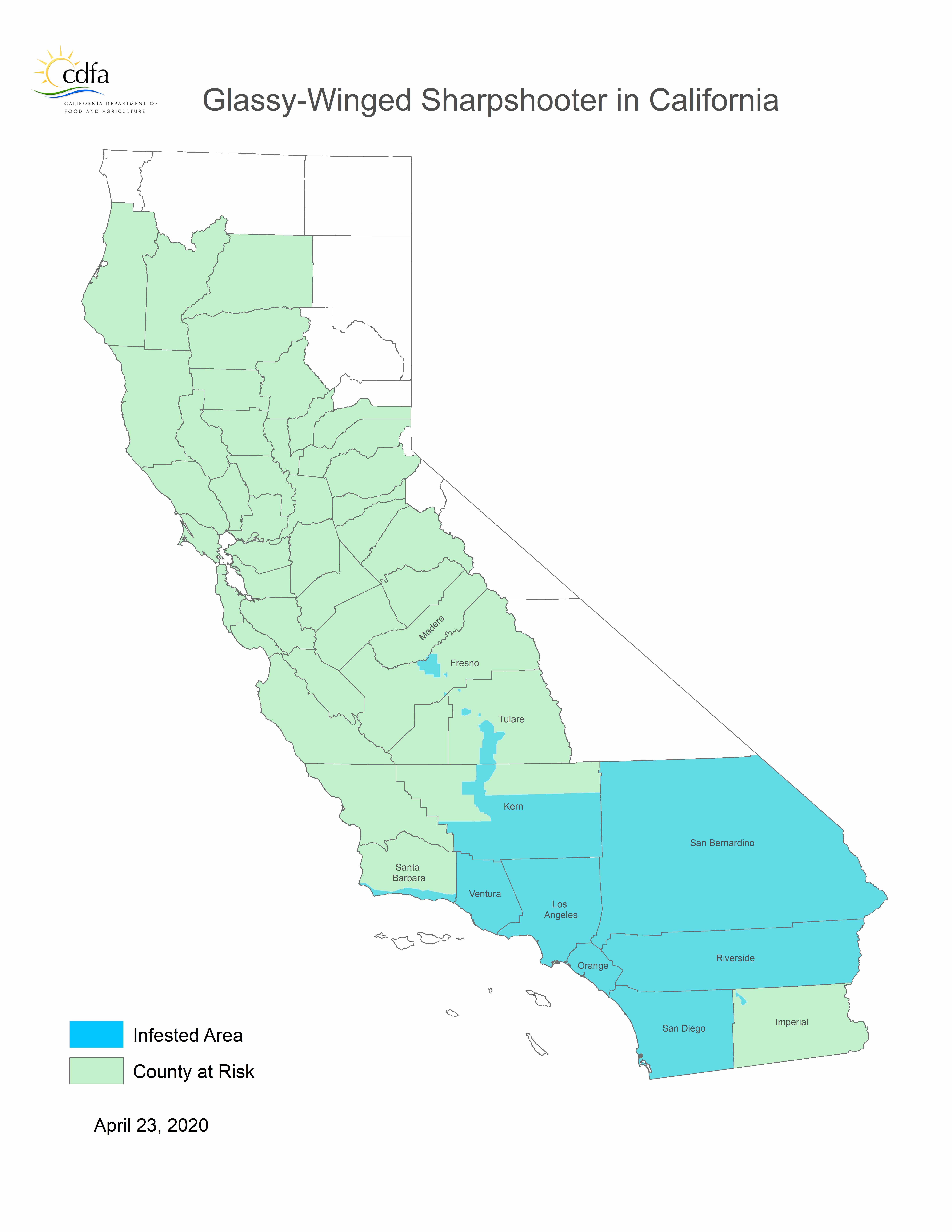 The glassy-winged sharpshooter (GWSS) is a vector (an insect or other object that can transfer a disease or other pathogen) for a devastating bacterium called Xylella fastidiosa. The bacterium causes a disease called "Pierce’s" disease that is particularly damaging to grapes. The Pierce’s Disease Program was set up by the California Department of Food and Agriculture (CDFA) to protect California’s vulnerable agricultural industries. One of the main aims of the program is to contain the spread of glassy-winged sharpshooter (GWSS), which is the main disease vector. This is accomplished by suppressing the population of GWSS where it has become established, preventing movement of GWSS to areas where it is not yet found, and eradicating new populations of the pest if they are detected outside of already-infested areas.

One of the successes of the state program is the use of biocontrol to lower the GWSS population. In California, CDFA is releasing a limited number of wasps in the genus Cosmocomoidea (formerly Gonatocerus) to help control the populations of the sharpshooter. The wasps parasitize the eggs of GWSS, killing them before they hatch.

In general, southern California is considered to be infested with GWSS, while northern California is currently free from the pest. In order to protect the well-established and lucrative wine industry, it is critical that the Bay Area counties maintain a robust line of defense to prevent the establishment of GWSS.

One of the main ways that GWSS can enter Contra Costa County is through the movement of nursery stock from southern California nurseries located in areas infested with GWSS. For this reason, shipments of nursery stock that contain host plants for GWSS are regularly inspected to ensure that they do not carry the pest. Agricultural biologists and pest detection trappers inspect approximately 3,000 shipments received at retail and wholesale nurseries throughout the county every year. In particular, inspectors focus on finding egg masses, but also look for other mobile life stages of the pest.

Pest detection specialists also deploy traps in nurseries, and urban and rural areas to determine if GWSS is present. GWSS are attracted to the bright yellow panel traps, which have an adhesive that catches any GWSS that make contact. Generally, traps are checked every second or third week and moved to a new location every six weeks. If the GWSS is found, a delimitation survey is conducted to determine if an infestation is present and, if so, to identify its boundaries. The survey is done by placing a concentrated number of traps in and around the initial find based on a specific protocol developed by CDFA. If more GWSS are caught, additional panel traps are placed using the new find as the epicenter of the delimitation survey. When the GWSS is detected outside of a nursery, a visual survey of all properties within a quarter mile radius of the initial find is also conducted.

In Contra Costa County, approximately 130 yellow panel traps are placed in nurseries, and 800 traps are placed in rural and urban areas annually. GWSS was last detected in a nursery in Brentwood in the summer of 2018. The nursery treated the area and a delimitation survey was conducted. No new detections have occurred since that time.