*Open to the public only after school hours.

The Alamo Municipal Advisory Council is comprised of seven members and one alternate that serve as an advisory body to the Contra Costa County Board of Supervisors and the County planning agency. Members are appointed to the council by the Board of Supervisors to serve the unincorporated area of Alamo.

MAC responsibilities include parks and recreation, lighting and landscaping, land-use and code enforcement, public safety, transportation, and other county services.

Meetings are held at 6 p.m. on the 1st Tuesday of each month. 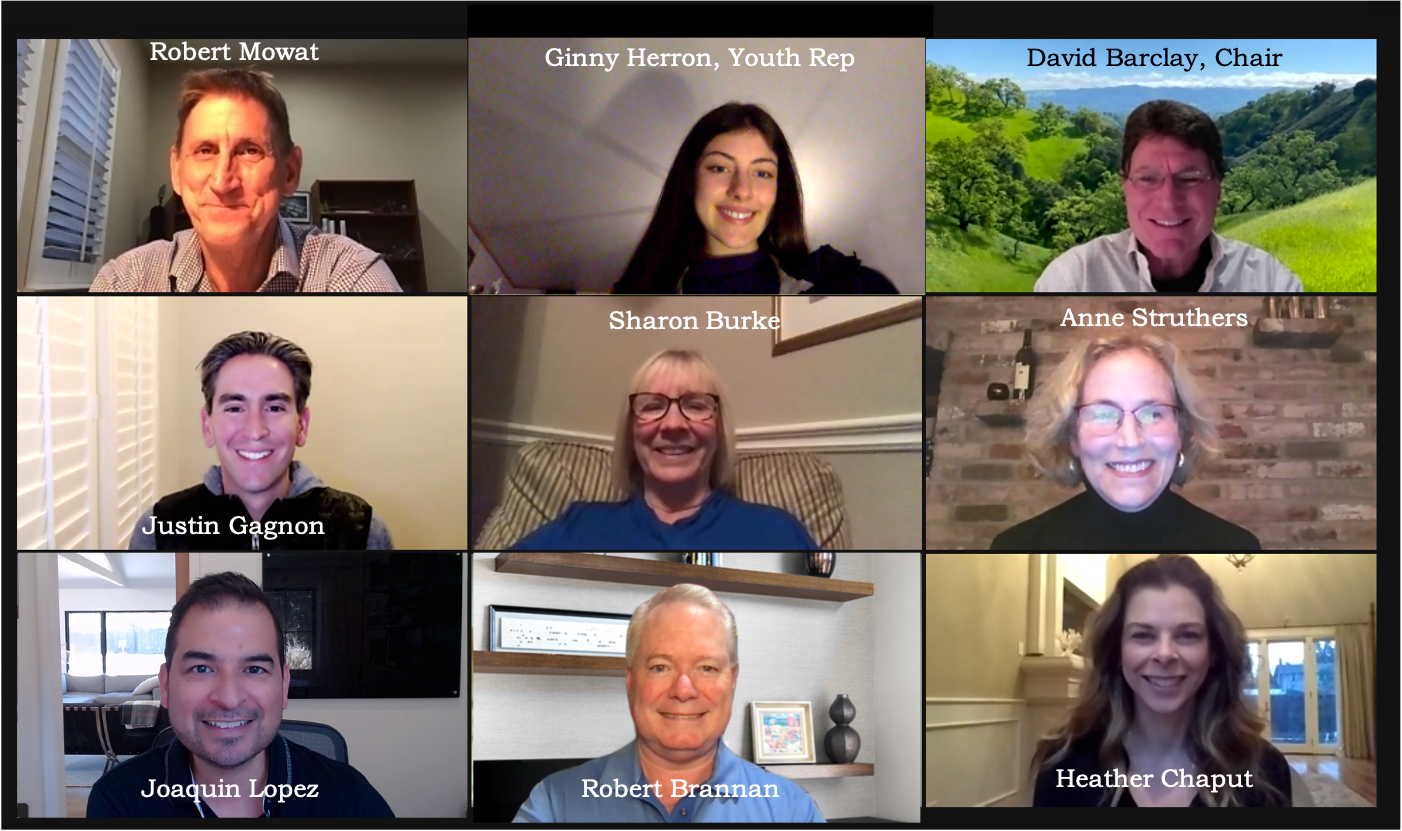 David Barclay (Chair): has served as President of numerous Homeowners Associations including Alamo Crest where he currently lives. He has been active in school fundraising and served as the Chair of the Oversight Committee responsible for the implementation of a school bond. He brings great experience in land and fiscal management to the MAC.

Anne Struthers: has lived in Alamo for over twenty years and has served on numerous local PTA boards. She is currently President of the Regional Center of the East Bay, and recently retired as a Division Manager for Contra Costa County Employment and Human Services. She brings knowledge of human services and community needs to the MAC.

Heather Chaput: has lived in Alamo for 14 years and has served in several community organizations during that time.  She holds a degree in Electrical Engineering and began her career in technology sales and business development with Texas Instruments Semiconductor Group and technology analyst firm, The Yankee Group.  Over the past 15 years, she has served in various volunteer positions at Rancho Romero Elementary, Stone Valley Middle School PTA, Women’s Ministries at Community Presbyterian Church and she currently leads a Youth Ambassador service group through Pledge To Humanity.  Heather and her husband are both Partners in the Napa Valley wine label, Rudius Wines. She is the mother of two active teenage boys and you’ll often find her enjoying exercise on the Iron Horse Trail and frequenting local restaurants.

Justin Gagnon: is a father of four school-aged children and CEO of Choicelunch, a healthy school lunch delivery company serving 300 schools throughout California. He currently serves as Board Chair for Open Heart Kitchen, a non-profit addressing food insecurity in the Tri-Valley. He is active in the community, serving on the school board of St. Isidore School and as President of the board of the San Ramon Valley Chorale, a community choir based in Alamo where he enjoys singing as a tenor. A native of the San Ramon Valley, Justin and his wife Allison are blessed to raise their family in the community he has always called home.

Robert Brannan: Robert Brannan has lived in the Bay Area since 1984, moving to Alamo with his family to raise their son, now a middle schooler, in 2011. He has been the Principal Owner of Network Professionals, an e-Commerce and IT Services company for the past 20 years. He has served on the boards and commissions of numerous organizations, representing both the general citizenry as well as local businesses. He served as a City Recreation and Parks Commissioner for five years, Board VP of Marketing and Board Chair of a large Chamber of Commerce, served 5 years on the Board of the Boys and Girls Club, has been an active volunteer most recently in Boy Scouts, and served as Den Leader and on Leadership Committee for Cub Scout Pack 800. He volunteered with the Rancho Romero Ed Fund as Online Auction Chair and System Admin for 3 years, and completed projects for the Rancho Romero PTA. He has also served on the Citizen’s Oversight Committee for a School Bond. Robert enjoys spending time bike riding, camping, and traveling with his wife, son, and friends, as well as taking advantage of all the wonderful events and opportunities our local area has to offer. He is honored to be selected to serve our wonderful community on the Alamo Municipal Advisory Committee and looks forward to contributing his time, experience, and energy to give back to this incredible town they call their forever home.

Robert Mowat:  was born and raised in the Bay Area is a former resident of Danville for 23 years and currently living in Alamo for the past 3 years. He is Principal for the award-winning landscape architecture and land planning firm Robert Mowat Associates located in Walnut Creek and the Napa Valley. His community experience includes past Commissioner and President for the City of South San Francisco’s Historic Preservation Commission for 8 years. He has been involved in charitable fundraising projects for the 1989 earthquake and the 9-11 Flight 93 Memorial in Union City, California. Robert Mowat is actively involved in the California State Licensing Board (LATC) writing and vetting exam questions along with being a grader for the National   Landscape Architecture Exam (UNE). He has served as a volunteer on numerous civic commissions and panels interviewing potential candidates and design teams for upcoming public works projects and positions. He frequently serves at universities as a guest speaker for students of landscape architecture. Mr. Mowat served as an HOA Board member as past President, Vice President, and Treasurer. He initiated and developed several capital improvement programs and reserve studies for the HOA.  He has served on several civic and public water conservation boards and panels.

Sharon Burke: has lived in Alamo since 1982, raising her three children here who all attended local schools. She has been active in community affairs, serving on Alamo's Boulevard of Trees Committee and Zone 36 Beautification Committee, and was a PTA President and served on the school district Schools Facilities Committee when her children were in school. She has a communications degree from the University of San Francisco. She had a 20-year career in association management and retired as Executive Director of the California Christmas Tree Growers Association. Her most recent public service was as an alternate public member on Contra Costa Local Agency Formation Commission from 2009-2017.

Joaquin Lopez (Alternate): Joaquin moved to Alamo in June of 2019 along with his wife Vera and their two children Alek and Anya. A native of Silicon Valley, Joaquin attended Homestead High School in Cupertino where he first discovered his love for Information Technology, inspired by Homestead’s most famous alumni Steve Jobs and Steve Wozniack. While attending UCLA as an undergraduate, Joaquin researched how advancements in Information Technology could impact public sector innovation. He went on to achieve a master’s degree in Urban Planning researching new policy approaches for public sector investments in IT – both in the developed and emerging markets. Following graduate school, Joaquin moved to Washington DC where he joined the World Bank as a consultant advising Bank clients on the successful development of Information and Communications Technologies (ICT) programs. During his time at the Bank, he led ICT projects in Japan, South Korea, Brazil, and Mexico. Joaquin also served as the Director for Cisco’s Smart+Connected Communities Institute. The Institute served Cisco’s global mission to drive thought leadership and collaboration for new town developments based on Smart Cities planning and design principles. Joaquin continues to remain active in the IT sector having held leadership positions at cloud computing leaders Oracle and ServiceNow. When he can, Joaquin bikes the local trails, experiments with international cuisine, and seeks out interesting spots to fly his drone.

P2B Meetings are held at 5pm on the 1st Monday of each month in the Alamo Plaza.

There is currently one alternate seat available on the P2B Committee.  Please click here if you are interested in applying.

P5 Meetings are held at 7pm on the 2nd Wednesday of each month at Round Hill Country Club.

There are currently two vacancies on the P5 Committee.  Please click here if you are interested in applying.