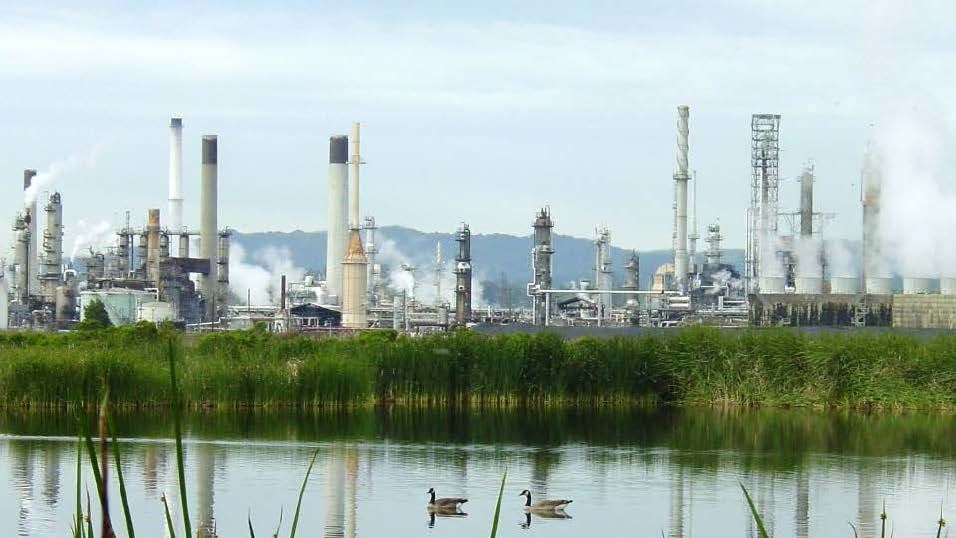 On November 1st, 2020, Tesoro Refining & Marketing Company LLC, an indirect, wholly owned subsidiary of Marathon Petroleum Corporation, submitted an application for a Land Use Permit to Implement the Martinez Refinery Renewable Fuels Project ("Project"). The permit would allow the conversion of Marathon's Martinez Refinery facility from the processing of crude oil, to the processing of renewable feedstocks. The renewable feedstocks are expected to include biological based oils (i.e. soybean oil and corn oil), rendered fats, and other miscellaneous renewable feedstocks including used cooking oils or other vegetable oils. The feedstocks would be processed into renewable diesel, naphtha, propane and treated fuel gas.

Refinery feedstocks and products are to be transported to and from the refinery using trucks, rail, marine vessel, and pipeline. Most of the existing truck traffic hauls petroleum coke and transportation fuels. Truck traffic following  the renewable fuels conversion is expected to remain about the same, where petroleum coke trucks would be replaced with renewable diesel product. Existing rail traffic at the refinery averages about 13 railcars per day with a peak of 27 railcars per day. The renewable fuels project would utilize existing railcar loading racks. Initially, rail traffic would not substantially change. Depending on still undetermined future transportation and logistical plans, rail traffic could increase to over 50 cars per day. The refinery uses two marine terminals for materials shipping and receipt, the Avon and Amorco Marine Terminals. Under the Project, the Avon Marine Terminal would be converted from distribution only to both receiving feedstocks and receipt and distribution of products. The Amorco Marine Terminal would be converted from receiving crude to distributing renewable diesel products. The two marine terminals currently handle approximately 160 ships per year. Under the Project, the two marine terminals are expected to handle up to 35% fewer ships per year.

The refinery uses two marine terminals for materials shipping and receipt, the Avon and Amorco Marine Terminals. In addition to the modifications to the Refinery, the Avon Marine Terminal would be converted from distribution uses to receiving uses primarily. The Amorco Marine Terminal would be converted from receiving uses to distribution uses primarily. The changes to the two terminals would require amendments to the lease agreements between Marathon and he State Lands Commission (SLC). Any significant change, modification, or re-design to the built facilities (i.e., structural, mooring, fire, piping/pipelines, mechanical or electrical systems) at the Amorco and Avon Terminals, as well as pending and routine compliance issues, will be subject to the Marine Oil Terminal Engineering and Maintenance Standards (MOTEMS) and require SLC review.

Outside the refinery’s conversion to feedstock refinement, many of the facility’s other operations, including the receipt, storage, and shipment of petroleum-based transportation fuels, would continue, with some modification of existing equipment.

The Board of Supervisors unanimously approved the project at their May 3, 2022 hearing. The meeting minutes will be posted on the Board's website when available (link).

The Martinez Refinery Renewable Fuels Project application and EIR will be heard before the County Planning Commission on March 23, 2022.

The Staff presentation for the project can be viewed online (link).

The Agenda and staff report will be available on the County Planning Commission webpage (Link).

The Final Environmental Impact Report (Link) can be reviewed online in advance of the meeting.

The comment period for comments in response to the Draft Environmental Impact Report (DEIR) (PDF) closed. The County is in the process of evaluating the comments.

A Notice of Availability for the Draft Environmental Impact Report (DEIR) (PDF) was posted. The comment period will begin on Monday, October 18 at 2021 and extends to Friday, December 17, 2021 at 4:00 PM.

The County has released the Notice of Preparation (NOP) and scheduled a scoping meeting for Monday, March 15, 2021, at 3:30 p.m.. The meeting will be held on a remote public meeting platform. Participation instructions can be viewed at http://www.contracosta.ca.gov/ZA when the agenda becomes available. Follow the link then click the “Most Recent” agenda tab.