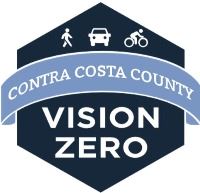 Vision Zero is a change in how we think about and approach fatalities and major injuries on our roadways. Instead of accepting collisions that result in fatalities and serious injuries as inevitable, Vision Zero requires us to instead think of these collisions as preventable through a Safe System Approach. A Safe System approach addresses the five elements of a safe transportation system through a shared responsibility and redundancy: safe road users, safe vehicles, safe speeds, safe roads, and post-crash care.

On March 1, 2022, the County adopted the Action Plan from the Vision Zero Final Report that was crafted by the Public Works Department, the Department of Conservation and Development, and the Department of Health Services. Outside agencies and groups, such as the California Highway Patrol, the Contra Costa Transportation Authority (CCTA), 511 Contra Costa, and bicycle advocates, provided important assistance to the County in this effort. Fehr & Peers was the consultant for this effort.

The following guiding principles were used to establish the Vision Zero Final Report and Action Plan:

Each year, more than 40,000 people — the population of a small city — are needlessly killed on American streets and thousands more are injured.

For too long, traffic fatalities and severe injuries have been viewed as inevitable side effects of modern life. While often referred to as “accidents,” the reality is that these tragedies can be prevented by taking a more proactive, preventative approach that prioritizes traffic safety as a public health issue.

The significant loss of life exacts a tragic toll, extending beyond personal loss to deep community impacts, including: personal economic costs and emotional trauma to those suffering; significant taxpayer spending on emergency response, and long-term healthcare costs. These costs are disproportionately paid by vulnerable road users and community members.

Vision Zero is more than engineering improvements, although that is a very important element. Contra Costa’s commitment to Vision Zero brings together a multi-disciplinary group that will address key focus areas for the County using all Safe System elements. The Vision Zero Team determined that the following profiles led to a great number of collisions throughout the unincorporated roadways.

In February 2021, a more technical document called the Systemic Safety Analysis Report (SSAR) was produced and adopted by Caltrans in June 2021. This report laid out the framework for where, when, and how crashes were occurring on the unincorporated roadways.

The Vision Zero Program was featured in Episode 2 of "Inside Public Works." Stream it now on YouTube.

Links to both reports are available below